Castleton in Derbyshire and self-catering holidays If you are looking for a self catering cottage in the Peak District, click for:

It is a village of handsome grey-coloured stone-built houses built around St. Edmunds Church and is overlooked from on high by the ruins of Peveril Castle from which the village gets its name. The castle stands since 1066 as a reminder of Norman conquest over the Peak. It was built by William Peveril, the son of William the Conqueror.

Visitors can climb the steep hill for a closer look, and inspect remnants of the stone flagged floor, a staircase, fireplaces and other features.

The Dark Peak to the north of Castleton and the less rugged and wild White Peak to the south are traversed by hundreds of footpaths and rights of way. The ridge above Castleton leading to Mam Tor (the mother peak) carries a steady stream of walkers. The winds at the top can be fierce but the views are terrific. Hang-gliders and paragliders can sometimes be seen taking their chances by jumping off the escarpement and into the wind. After the initial effort of climbing up to the ridge it's possible to walk along the top taking in one peak after another. Walkers will find a myriad of footpaths radiating out from Castleton. One footpath to Hope is fairly flat and pleasant, and offers many interesting views of the river, past a railway line, and some excellent rural views. But, armed with a good map or guide, walkers will be able to choose from a variety to best suit their own ability and expectations.

We visited at the end of December when the weather is grey and chilly and low lying cloud obscures the peaks at times, but still enjoyed the views and walks. One bonus of this time of year is that 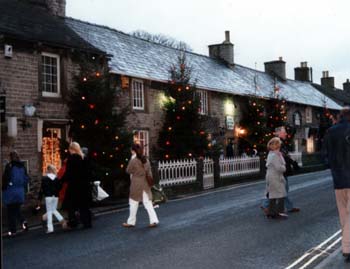 Castleton is beautifully decorated for Christmas. Numerous Christmas trees with brightly coloured lights adorn the pavements and buildings. Tea shops, pubs and restaurants contribute to the seasonal extravaganza. It's worth a visit just to get into the festive spirit.

It's definitely worth paying a visit to Castleton during the Christmas and New Year period just because it's extravagantly decorated and so pretty.  Visit from the end of November through to the beginning of January.

Local gift shops are well stocked and also sell jewellery made using local 'Blue John' stones which are mined in Castleton. These are a blue streaked form of Fluorospar and come in a range of colours varying from yellow, through to blue and purple. Originally French craftsmen were employed in cutting and polishing the stones they called 'Bleu et Jeune'. Hence Blue John. The Blue John mine with its visitor tour is one of Castleton's attractions.

Caves are another popular tourist attraction. Castleton has four, and boasts some of the best examples of caves in Britain. Speedwell Cavern, which is a former lead mine, offers a unique and memorable boat experience in dark and gloomy, and supposedly haunted, water filled caves.

Peak Cavern or the 'Devil's Arse' is located underneath Peveril Castle. It has the second largest natural entrance in the world. Treak Cavern, a little way out of the village, is generally accepted to have the best formations of stalactites and stalagmites.

The former A625 at the foot of Mam Tor used to take visitors from Treak Cavern to the Blue John cavern but because of extensive subsidence due to the layered shale and gritstone structure of Mam Tor, this road has now been abandoned in favour of a new route (Winnat's Pass). However, the road is still perfectly practical for walkers and cyclists although their are drops to be negotiated where the road has collapsed. Mam Tor is now known as the 'shivering mountain'; it shivers and the road falls apart. Castleton is very popular with walkers and day trippers who outnumber locals during the summer. Positioned roughly halfway between Manchester and Sheffield, it's ideal for a day out in the countryside. There is a large central car park but this runs out of space on busy summer weekends. Otherwise, Castleton is well equipped to deal with the numerous visitors; the centre of the village has several tea shops and pubs offering refreshments and a comfortable place to rest.

The George Pub sells cheap beer in 4 pint mugs to satisfy anyone's thirst. Several other pubs can be found along the main road - the Bull's Head, the Olde Nags Head, the Cheshire Cheese (with quiz nights), Peak Hotel, and the Castle. There is also a petrol station, a general store, book shop, and a post office. 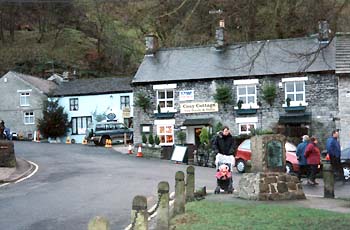 Other recommended times to visit are at the end of May when Castleton hosts a carnival which includes Garland or Oak Apple Day. This is usually held on the 29th of May (unless it falls on a Sunday when it is held on the 28th May). This ceremony entails a 'Garland King' dressed in Stuart costume riding a horse through the streets wearing an enormous wood framed garland of wild flowers. He is accompanied by his queen who wears a smaller version. Eventually, the king's garland is removed and hoisted to the top of St. Edmunds church tower where it is left. The queen's garland is placed at the war memorial.

Castleton war memorial at the edge of the village green.

There are also marching bands, music, Morris dancers and various other musical treats. This ancient ceremony has evolved over the years from a possible pagan fertility rite to absorb the restoration of the monarchy in the 17th century. Whatever its origins, it provides a good day out for all ages.