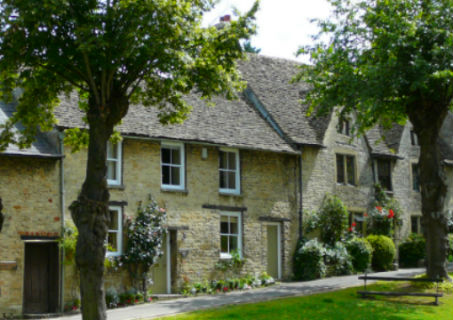 Oxfordshire is a fantastic area in the South East of England for cottage holidays and is probably best known for the beautiful historical city of Oxford and the gorgeous Cotswold countryside to the west. Oxfordshire is a good choice for self catering breaks as it is easy to get to Oxfordshire from many parts of England and London is just 1 hour away by train. There are various luxurious and attractive cottage to rent for a week or two - long enough to explore the prestigious city of Oxford, enjoy a Thames walk and discover pretty Oxfordshire villages.

Oxford is home to a world famous university with a world class reputation.  Oxford itself is very attractive, in no small part, by virtue of the many historical university buildings spread throughout the city.  The city is characterised by numerous impressive towering spires, historical buildings including the 16th century Bodleian library, the beautiful Christ Church and the Radcliffe Camera, an impressive Rotunda.  There are also pretty courtyards, large open green spaces and a river which is popular for boat trips or punting as it is called locally.

Around 7 miles from Oxford, you can find Bicester which is an essential place to visit if you love to shop, with a large purpose built designer village where you may be able to pick up a designer bargain.

The North Western part of Oxfordshire forms the Oxfordshire Cotswolds.  The Cotswolds are an area of outstanding natural beauty, famous for beautiful English countryside, attractive country cottages and pretty towns and villages with a quintessentially English feel.  The Cotswolds towns are also identifiable by the honey coloured Cotswolds stone which has been used to build the great majority of the buildings.  Blenheim Palace is a magnificent historical palace with expansive gardens located near Witney in the Oxfordshire Cotswolds.  Pretty Cotswold towns and villages in Oxfordshire well worth a visit include Chipping Norton, Woodstock and Burford.

Search cottage map of cottages elsewhere in the UK and Ireland