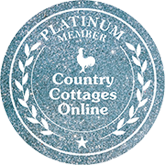 Membership Badges
The owner/agency for Gardeners Cottage has been advertising with Country Cottages Online for more than 12 years. Read More
This cottage is from Burnfoot Holiday Cottages, an Independent Owner

Interested in Booking?
Have a Question?
Ask Gardeners Cottage a question

Book a stay at Gardeners Cottage and look forward to a stay in a luxury stone-built holiday cottage, on the edge of Northumberland National Park.  For day trips out, the Northumberland coast is only around half an hour’s drive away where you can discover coastal gems such as Bamburgh with its sandy beach on day trips.  For eating out and shopping, the appealing town of Rothbury is just 6 miles away.

•    Sociable open plan living area with a beautiful atmospheric spacious lounge with comfy leather sofas, flatscreen TV and a warming woodburner,, plus a high quality well-equipped kitchen for easy self-catering, and a dining area.  Doors open out from the kitchen to the enclosed south facing garden.

o    A ground floor bedroom with a double bed.  Next door to this room is a shower room with large shower, basin and WC.

o    Bedroom with country views and zip and link beds (can be made up as a king-size bed or as two singles).  If required, an additional single bed can be set up in this room (an additional fee applies).  Please advise on layout required at the time of booking.

Outside this holiday home has a fully enclosed garden (ideal for holidaymakers with dogs), as well as a terrace with garden furniture for soaking up the sun and dining alfresco in summer time.  There are also 2 parking spaces.

Pet-friendly, up to 2 well behaved pooches are welcome here.


Discover Northumberland National Park and the Northumbrian Coast on Holiday

Close by is Northumberland National Park, which with its stunning landscapes, is a joy to explore.  Also within easy reach for day trips is the Northumberland coast with its castles and sandy beaches. Visit fascinating places such as Holy Island, the quaint fishing village of Craster and Bamburgh with its historic castle and long stretch of golden sands.

Dogs welcome - up to 3 dogs

Cultural treats in the area include the award winning £32 million Alnwick Garden, the Holy Island of Lindisfarne, umpteen historic castles to be explored along Northumberland's Heritage Coast, Hadrian's Wall, and Newcastle's Quayside with its Baltic Arts Centre and Sage Music Centre. The largest estate owned by the National Trust, Wallington Hall, is a short drive away, as is the National Trust owned Cragside House, the home of Burnfoot's illustrious former owner, Lord Armstrong. Less strenuous pursuits include spending lazy days enjoying the endless, golden beaches of the Northumbrian coast, or simply browsing through the boutiques of the charming market towns of Alnwick and Morpeth. Other days you will simply want to stay put and appreciate your surroundings. The fields surrounding the cottages are a protected Site of Special Scientific Interest due to the rare wildlife present - from otters and kingfishers, to a variety of rare wintering wading birds. With your own holiday home in what the Campaign to Protect Rural England have scientifically proven to be the most tranquil place in England, you'll just need to be here to be restored, inspired and refreshed!

Recommended Places to Visit: Northumberland has so many castles due to its turbulent past. The Kingdom of Northumbria was formerly the Capital of England and this area has been the site of many power struggles in history. Keep an eye out as you drive around north Northumberland and you will notice many ‘Pele Towers’ or fortified houses – at times it was virtually impossible to live in anything else around here. There is a full list of the best Castles, Gardens and Stately Homes within an easy drive inside every cottage. The coast of Northumberland is stunning. Beautiful, deserted sandy beaches, littered with ancient castles. There are umpteen walks and beaches – details of which can be found in the welcome pack of every cottage.

Recommended Places to Eat Out: Just a five minute walk from Burnfoot is The Star Inn, one of only twelve pubs from England and Wales to have appeared in every issue of the Campaign for Real Ale's Good Beer Guide since it was first published in 1974. There are lots of other local inns and restaurants, from fine dining to hearty pub grub – a full list of which is inside every cottage.

Sorry this property doesn't have any reviews on Country Cottages Online currently, ask the owner or agency for details of their reviews and testimonials.