Wiltshire Downs and Places to visit in Wiltshire

The Wiltshire Downs are one of those areas of countryside where history and mystery touch upon modern life. The Avebury World Heritage site is recognised by United Nations as the most impressive Neolithic panorama in the country. Here you will find the largest stone circle in Europe although Stonehenge is much better known.  The land is dotted with megalithic tombs, Neolithic burial places and different types of barrows, which are ancient monuments to the dead.

No fewer than seven white horses are carved into the chalk of the hills, and are reputed  to have magical powers of restoring fertility.  At least the exercise of climbing the hills to stand on a certain part of the horse's anatomy will improve general fitness and circulation, so perhaps there is a crumb of truth in this ancient myth. A similar creation of the 'Cerne Abbas Giant' in Dorset is shown below. 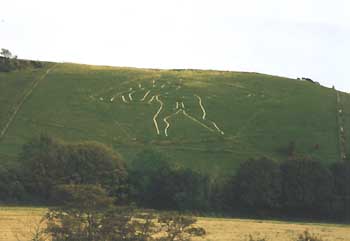 The Iron Age, Romans and Saxons have all left their mark on the countryside.  Iron Age terracing can still be seen at Fyfield and Overton Downs, and hillforts can be found at Barbury Castle, Martinsell Hill, Oldbury Castle and Oliver's Castle.  The Romans left a legacy of straight roads,  such as the London to Bath road. The Saxons defeated the early Britons in battle at Barbury Castle in 556 AD.

The market town of Devizes contains a large number of listed buildings of architectural interest.  Antique markets are held in the Shambles on Tuesdays and general markets are held in the town marketplace on Thursdays and Saturdays, as they have for many decades in the past. A very popular Farmers Market is also held, where fresh produce is sold directly to the public.  Most tourists to Devizes visit the Kennet and Avon Canal's Caen Hill flight of 29 locks which rise 237 feet in a distance of two and a half miles and take a walk along the towpath.  Canal boats can be hired by the day or week for a leisurely admiration of the Wiltshire countryside (Tel: 01380 725 300, or 01380 728 504).  If you would like to find out more about the history of the canal, the museum at Canal Wharf is open daily (Tel: 01380 729 489).

Stonehenge is just twenty miles away from Devizes and is well worth the trip.  The Wiltshire  towns of Marlborough, Pewsey, Wroughton and Calne all have their attractions and historic places to visit.  Lunch at a traditional English pub provides a pleasant interlude during the day.

The entire county is criss-crossed by bridleways, footpaths, and waterways. It's perfect for outdoor activities of all types.  Take to the air in a hot air balloon for an aerial view of this beautiful and ancient county (Tel: Cameron Balloon Flights on 01672 562 277).