Guide to Cottage Holidays Near Stonehenge

Stonehenge is a well known national landmark - a mid Neolithic standing stone circle on the Salisbury Plain in Wiltshire which is regularly visited by tourists, Druids and those interested in ley lines (lines joining ancient or sacred sites) and harnessing the Earth's natural forces.   It has to be one of England's best loved visitor attractions and also somewhere that many Brits like to visit. 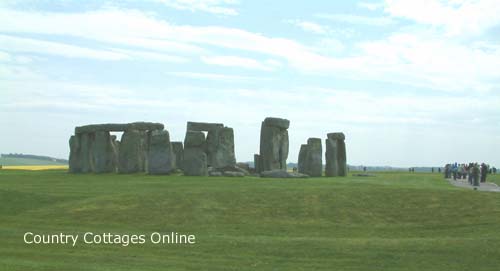 Still something of a mystery, the stones with their associated earthworks and timbers were developed over a period of time from about 2800 BC to 1600 BC.  For people to have sufficient interest in obtaining such large chunks of stone, sarsen stones from the Marlborough area, but some from as far afield as Wales, and to develop the site over such a long period, the stones must have held significant importance, but the reasons are unclear.  It does however beg the question of 'why was stone from Pembrokeshire in Wales necessary?'   Of the original thirty standing stones, only seventeen are now upright. How the four metre tall stones were conveyed to the site from Wales and other distant locations is yet another mystery.  From this period arise the myths and legends of giants, half gods-half men that roamed the Earth.

We know that the sun rising for the midsummer solstice can first be viewed through the alignment of two stones, and Druids still worship here, although attempts have been made to restrict contact with people in order to minimise damage and preserve the stones for future generations.  One of the stones resembles an altar and is therefore inevitably associated with blood sacrifice.

Various peoples have been credited with the later development of Stonehenge including Boadicea, and King Arthur and Merlin, but all is still speculation and mystery. The only certainty is that the stones continued to be thought important through the ages.

Nowadays, viewing is from a distance after payment of an entry fee. You can still try to tune into natural forces and see if you can sense the power of the stones.

Stonehenge can be found three km. west of Amesbury on the A303. Another stone circle on a larger site can be found at Avebury in Wiltshire.  There are many of these ancient sites to be found all over Britain and a search on the Internet will reveal the continued great interest in these sites and remarkable documentation of the stones.

Stonehenge is protected and managed by English Heritage.  When visiting Stonehenge you can enjoy a gentle walk around with an audio guide or for groups or those with the budget, you can research booking a guided tour.  An entrance fee applies but entry is free for English Heritage members.

If you are visiting Stonehenge, it is recommended that you don't miss out on the nearby city of Salisbury.  Stonehenge is located just 10 miles from Salisbury which is a city with a lot of green spaces and beautiful historical architecture including its impressive cathedral and some interesting National Trust town houses.  There are a number of cafes, tea shops, pubs and restaurants where you can take it easy and soak up the historical ambience.

The edge of the New Forest is only around 20 miles drive away from Stonehenge so is within easy reach.  With its trees, green spaces, pretty villages, tea shops and visitor attractions, the New Forest can be appealing for family holidays and romantic breaks alike.  Watch wild ponies gently grazing on the grass and enjoy the miles and miles of forest trails.

Self-catering holiday cottages within a short drive of Stonehenge

There is lots to see and do on a self catering holiday near Stonehenge.  Firstly this part of the country has fields and fields of gorgeous traditional English countryside.  This makes for a relaxing environment to enjoy yourself on a self catering break.  Also, Stonehenge is near to the beautiful historical city of Salisbury with all its associated attractions.  Stonehenge itself though is a must do trip - reconnect with the power of nature at this special place.