Great Hockham is a small but charming village that lies to the north east of Thetford Forest.  It's a five minute walk away from a section of the forest but about a twenty minute drive to the High Lodge Visitor Centre and amenities in the heart of the forest. 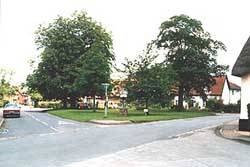 The village is built around the triangular green in the centre, where there is a bench to rest and admire the lovely traditional cottages surrounding it.

The large stone on the village green was discovered in the 1880's and dragged to the green by two horses.  It now forms part of a stone turning ceremony which is performed to celebrate special occasions like the Millenium and the Queen's Jubilee. It takes six people with levers and strategically placed blocks of wood to turn the stone.  This unusual ceremony was filmed by ITV in 1977 - an example of a quaint Norfolk custom.  A village fete with such events as wheelbarrow races usually accompanies this event.

People in the country have always had to generate their own entertainment and  typical village happenings take place.  There is a parish council with regular meetings, an annual flower show where gardeners compete with the best and biggest vegetables, and the occasional quiz night.  The Eagle pub provides an opportunity for people to meet over a pint of beer in the evenings. The Great Hockham news sheet is distributed to all inhabitants and neighbours know each other well in such villages.

Hollyhocks, those traditional cottage garden flowers grow in abundance and adorn many a front garden.  It's worth paying a visit just to take a look at the beautifully cared for cottage gardens with a profusion of flowers.

Self-catering accommodation in and around Thetford Forest, Breckland, Norfolk