Holidays near Long Melford in Suffolk 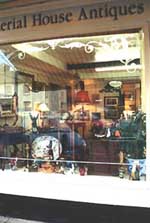 For many people over a certain age, the village of Long Melford in Suffolk  is known as the area where the Lovejoy series was filmed.  Lovejoy being a fictional antique dealer and loveable rascal.  And indeed, if you visit Long Melford today, you will find more  antiques shops than in most places, regular antique fairs and many connections with history and the arts.

The village itself is similar to many in Suffolk with houses of all ages and styles co-existing side by side; covering the whole spectrum from Medieval through to Victorian, Georgian and modern day.

Long Melford is a pleasant place to visit with a good variety of pubs, restaurants,  interesting  and original local shops, including an old-fashioned butcher.  There is even a pottery along the high street which is worth a browse.

Take a look for self catering cottages in Long Melford Suffolk

One thing about Suffolk which always contributes to making any visit successful is the slower pace of life and general courteousness of ordinary people.  And, there's always reams of history and tradition. The elegantly clipped hedges of a house with equestrian connections can be seen in the image below.  There's something very traditional and middle class English about formal hedging.  The same could possibly be said of antiques.  Personally, I think the British are obsessive about beautiful objects and ancient houses.  We would rather restore a crumbling ruin at great cost sooner than demolish and build from new.  Is it because we're sentimental and attach a historical importance and sense of romance to anything above a certain age?

Long Melford is blessed with two stately homes; Melford Hall which is cared for by the National Trust and moated Kentwell Hall, of Tudor re-enactment fame. These re-enactments enlist the assistance of armies of volunteers who recreate life at the manor, in villages and on a farm. They are highly recommended for an authentic 'step back in time' experience for people of any age.  Allow a whole day to enjoy the activities and interact with people in the Tudor age.

Melford Hall is the second stately home in Long Melford.  Sir William Cordell  indirectly inherited the land and hall of Melford Manor following Henry VIII's dissolution of the monasteries.  He rebuilt  the hall and entertained Queen Elizabeth I in 1578. The panelled banqueting hall of the house is much as it was in the 17th century, and there is a good collection of fine furniture and Chinese porcelain on display.

Beatrix Potter enthusiasts will be pleased to know that the house contains a Beatrix Potter room with a  collection of her paintings and memorabilia.  Beatrix Potter was  related to the family and a frequent visitor at the time.   A country fair is now held at Melford Hall in June each year.  There are also various art exhibitions and displays held throughout the year.   A 'Big Night Out' is advertised as the local 'happening' for the first Friday in November.  If you're planning to visit Long Melford, it would be advisable to check local events and to pay a visit to at least one of the stately homes.

If you're exploring Long Melford then you will most probably come across the Church of the Holy Trinity.

Find lovely self-catering cottages to stay in whilst exploring  Constable Country on the Essex and Suffolk border using the menu on the left.