Home  The tourist attractions of the City of York England from

Visitor Attractions for Tourists in the City of York, England, UK

So much to do in York ... you will have to make more than one trip to see everything.

On the outskirts of York at the Yorkshire Museum of Farming in Murton is Danelaw Village which manages to produce Romans and Vikings out of the past in character and costume.  Try your hand at ancient crafts and visit the reconstructed Saxon village. Telephone: 01904 489966. 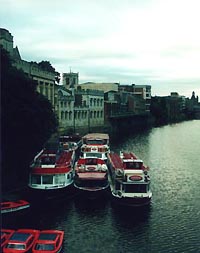 Take a boat trip along the rivers to view some of the landmarks of York. Catch at Lendal Bridge. Telephone: 01904 623752.The riverside is great for walks or for refreshments at one of the riverside pubs, cafes or restaurants.  Several  handsome historic stone bridges cross the rivers at intervals.

Time to get away from it all and relax in your own private hot over looking a trout lake in this isolated farm valley just an hour away from Hereford or Shrewsbury.
This special offer ends on 22-08-2020

Why not have a few days in Scotland Highest Village and have a staycation.
This special offer ends on 20-08-2020

Please bear in mind semi lockdown rules apply in West Yorkshire, whilst pubs and restaurants and most venues are still open for two groups get togethers we are currently only allowed one family group per stay for this reason I have reduced the price drastically £1850 for single families living in the same household up to 10 in number who will only need 5 or 6 bedrooms.
This special offer ends on 02-08-2020

Ideal for large groups and family holidays, get togethers the great escape! idyllic setting and over an acre of private grounds.
This special offer ends on 02-09-2020